"Convert to actions" Order by and how to link actions? (Help, suggestion, feedback)

Well, I’m new to GTD and I’m not sure if it’s the right way…
But I’d like to do some nested projects or at least link the items from checklist to Actions after clicking on “Convert to action”.

I’ve uploaded an image to illustrate the problems. 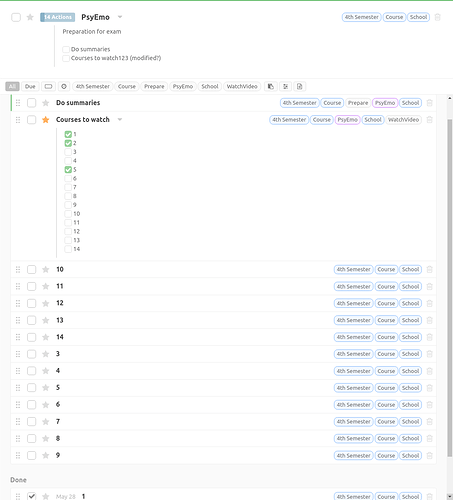 I’ve converted the checklist to actions so that I can put due dates or description on them. You can see that it lost its tags from the action I’ve converted from (WatchVideo and PsyEmo). So it would be a hassle to add them manually to each of them. I don’t know if its a limitation of the free version, a bug or intended.

You are right, the tags are indeed lost during conversion, and it is a bug. As a temporary workaround, you can add the tags back in bulk, see Bulk Delete and Edit Tags Operations, Waiting For Projects, UI Contrast and Alignment Improvements, and More - Everdo Update 1.3.5- Everdo

When converting into actions; the resulted actions are reordered alphanumerically and doesn’t keep the order from the action/checklist they were converted from. You can see 10, 11, 12, 13, 14, 3, 4, etc.

This will be fixed in the next update as well. Thank you for reporting.

Well, kind of the same thing than 3), but with the projects description modifying the action name (or vice versa). How to?

What is the use case for linking the checklists to actions?

Thanks for your reply.

Yeah, I’ve figured out how to tag in bulk ! Would it also possible to edit “due date” in bulk? I don’t think I’ve found that functionality and it would useful for setting due dates faster for “draft planning”, in my case.

The use case for linking the checklists to actions would be to have a global view of the progress in a kind of nested project. Well at least in my mind, it would help me to have a more organized view.
An example scenario would be :

There’s too many atomic actions if the checklists aren’t connected to those actions. And it would be difficult to check on global progress for planning and/or adapting when approaching the finals exams dates. Let’s say 4 or 5 exams on a week (for a busy final session), the next week another 2 exams and the 3rd week some projects to submit, at some point there might be too many actions for each projects and in the “Next” or “Focused” sections.

It helps to not be lost (well, the reordering alphanumerically might be the culpable here, so maybe the next patch update might help for that). Useful for a mind map.

Let me know if it makes sense and/or could already be done by other means/methods.

Otherwise, thanks for your explanation !
After my finals, when I got time and purchased the app, I will test your methods by discarding the original checklist and using much more of tags/labels/areas to see if it helps and will try to come up with my own methods

Thank you for your time, have a nice day!

Thank you for explaining the use case.
I’m not sure it’s good to duplicate the same information (project actions vs a checklist in the project’s description). I think it would make more sense to implement a view option of the Projects list to show child actions somehow. But even then, if you want to see progress, there are progress bars at the project level that take into account the number of project actions and their time estimate.

Would it also possible to edit “due date” in bulk?

No, this does not exist.

Yeah I don’t think neither that duplicates are a good idea. But I was saying it in the context of the current app’s functionalities and how I use it (as of right now, we cannot interact with individual items of the checklist, like assign them due dates, duration etc. ; so kinda like a workaround, I guess).

The general idea is to have the option of nested projects in order to have more customization choices regarding the structure of the project, I suppose.

I’m not yet comfortable with deleting the checklists and have everything in the project as a lot of actions, which just looks messy and doesn’t help with the planning part. I have tried but it’s just not how I function. It’s not really about the “seeing the progress” part, although its in it, but it’s more about the planning part where a global view would help me. Nonetheless, thanks for the suggestions!

Would “edit due date in bulk” be released in the future?

Something you might want to try. Make the checklist’s their own projects and use the name of the project in a master project.

An example for some 3D characters I’m working on:

Set one or more of the projects sequential and you only have the tasks you need to focus on in your next box.

In my case I want to create the characters in a certain order and I do the tasks for each character in order so in my next box I would have:

Thank you very much for your input !

Yeah that “videos to watch” was an example and it doesn’t have to be sequential. But that’s a great idea!

So when you say “Master project”, you’re referring to an “area” ? Or just a project which has the checklist of other projects (which are its “sub-projects”) ?

Anyway, thanks again! I’ll check again and test it when there’s dark mode

For that particular project I have the “Master Project” set up as a sequential project with each of the 3D characters to be created it’s own project.