Everdo has Areas, which are a great way to focus on 1 focus area, but Folders would be a nice way to be able to group Projects as well.

The difference is that Folders can be expanded and collapsed. They can be used to group similar Projects together if the user wants to.

If we look at using only Areas as a way to group Projects we see that when looking at the unfiltered list, we may see 1) a long list of Projects, 2) without the benefit of grouping unless we drag Projects together. 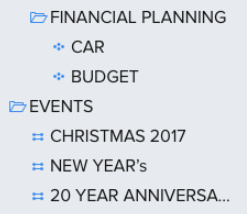 What about tagging the projects as means of organization?

It won’t affect the navigation of course, but you’ll be able to filter the list of project by tags, which is much more flexible than something like folders.

Another thing, is that the projects are meant to be completed, not stored/organized.
A project itself is an outcome rather than a container of somewhat related actions. I wonder if the need for folders/nesting arises from treating the projects themselves as “folders”.

Yeah,if there are no folders I’ll be using tags and/or areas to organize projects. Especially as it will cut down on coding time. Otherwise the next request is to have collapsed folders expand when you drag something to it

Most of my projects are long running and/or recurring. Projects, too, need to be stored in a system you can trust (which Everdo is quickly becoming). The system itself needs to be organized too.

I wonder if the need for folders/nesting arises from treating the projects themselves as “folders”.

I use Projects in a very GTD way: anything that requires more than one physical action to complete. So you quickly get a lot of projects.

Folders are just a way to group things together. Depends on the user preference of course. My Documents folder in Dropbox has subfolders; others like to just throw everything in there and use search to find what they want.

Same holds true for me for Focus or other views: it’s nice if you can ask the interface to “group by”

To quantify the feature request: in the long term it’s something I’d like to have, prefer to have, but I can work around it using tags and areas.

As a workaround I’m using dividers: projects with dashes as a name

I don’t know if you are serious, but it’s a nice hack

Yes, I’m serious. I’ve always grouped projects together, making it easier for me to scan what is what. This is an old hack I’ve used in other programs in other situations. In fact, I have a shortcut for it setup in AutoHotkey

I’m going to have to agree that folders are needed. My company does mostly consulting work and I have dozens of companies I deal with and a few have dozens of separate ongoing projects with a mix on current and future items to keep track of.

For the moment, as a workaround, have you tried using Areas as “folders”? And/or the separator hack?

Visually I rely much more on the separator. Bit bugging I can’t drag & drop Projects in the sidebar but either that gets implemented someday or I can live with it by pressing 7, scrolling, dragging. Bit more resistance, bit less flow, but it works.

I haven’t attempted areas yet. The thought has crossed my mind. The problem comes down to trying to get a big picture look at all my projects. I can set it to view all areas, but then I see my personal projects as well.
Hmm, I just found out you can control click the tags to select multiple, but this in a AND operation, not an OR operation, no way to select multiple tags.

You can also use the Area dropdown at the top to really select only one Area.

Areas are created by going into the tag/label editor (press T) and setting the label as Area. I use all capitals for my areas to distinguish them.

I found out about the right-click earlier from a different topic. That’ll help, indeed. Would still like folders tho.

Yes, very much so. And visible in the sidebar as well, like in Omnifocus

I’m going to have to agree that folders are needed. My company does mostly consulting work and I have dozens of companies I deal with and a few have dozens of separate ongoing projects with a mix on current and future items to keep track of.

Areas are indeed the intended way to deal with this.

Since a area in Everdo is just a tag, a project can be assigned to multiple areas at the same time, so it’s possible to create a hierarchy similar to using folders, but more flexible.

For example, you can have Work tag for all work-related projects, and then add XYZ Inc. area to a specific company’s projects.

As an aside, “Tags vs Folders” is an old argument. It’s generally agreed that tags are more flexible, while folders are rigid but easier to understand or visualize.

Please understand that the resistance to implement folders originates mosly from not seeing the problem clearly enough.
A feature like this is huge in terms of design, development and potential support effort. All this time may be much better spend on other features.

A better problem statement is needed to move forward. Having “too many projects” in the navigation is not enough by itself. If that’s all there is, then it’s already solved by other means.

The questions to consider:

The best argument I have is that my brain works in hierarchies. For instance in the case of my work I break things down by company, then products, then areas of focus, then tasks. Not every company has a full tree either. So something like

So, now, I can tag all these, but then my tag cloud gets a large amount of things in it that are either company or product specific, and the tag cloud represents no logical hierarchy either.

Now I could maintain this hierarchy outside of Everdo, but now I have two systems I’d have to keep in sync.

Another point to bring up is how this relates to the view. If I can see my history above, this works for me. But it becomes much harder to see what belongs to what when its listed like

You’ll note a few things like the project its in is on the left, but the tags are on the right. Also, the tags are sorted, so depending on names, the order changes. Really hard to get an overview to see where how things stack up.

Preference does not count […]

As an aside, “Tags vs Folders” is an old argument. It’s generally agreed that tags are more flexible, while folders are rigid but easier to understand or visualize.

There you have it both in a nutshell. Taggers vs filers vs pilers; it’s almost impossible to convince one side of the other side. Pilers prefer to rely on search and use neither folders nor tags. Filers go for folders; taggers for tags.

But just as you say here and @jjlucsy illustrates; " folders are […] easier to [,] visualize"

In OmniFocus I group projects in folders:

The folders can expand and collapse the same way they can in Explorer.

So I group them by area or responsibility (which we already have with Areas) but with the added benefit of an immediate visual representation. Compare: imagine browsing your computer and the folder picker is a dropdown menu item at the top of your window instead of a folder tree.

Or, as another example to “get” what a filer sees, imagine Everdo having only one notebook which you can organize using tags and areas only.

Besides area of responsibility I occasionally also use it for the higher level of Goals. Such a folder can be a parent, top level folder but just as easily a subfolder within the existing tree.

I’ve read a research that found that the single most common cause of failure of software start-ups was developers not listening to their users needs and instead focusing on their own vision. Food for thought.

I’m migrating from Omni Focus and the only feature that I’m missing currently is project folders. I’ll use areas and filtering by tags instead (and I’m pretty sure it will be better when I get used to it) but I’m sure that lack of this feature will be deterring to new users.

On a related note, I’d really like to see the ability for Projects to depend upon the completion of another Project(s). I have a bunch of Projects that can’t be started until other Projects are completed, so it would be great to be able to hide Projects with unmet dependencies.