It would be nice the following feature:

Inline commands are preceded by a colon ( : ) and let you add special information to each task while you are writting the task. Its a way to save mouse clicks. For example:

The idea is that just by typing the name of the task I am assigning all the characteristics of this task.

I took this idea of facilethings, I am (or was

) a user of this tool. This is the complete detail of this funcionality: 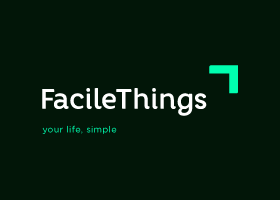 This resource shows you how to use inline commands in FacileThings to organize and schedule your stuff.

I think this is a nice one.
I like that it can be improved gradually by adding more commands.
Which commands do you think would be most useful for a start?

Perhaps time, energy and due date. You can write labels just with a tab.

This is a great idea and I agree with Raullg that time, energy and due dates would be a good starting point.
I used a lot this feature in Todoist and I think it handles it nicely, even complex recurring or repeating due dates.
Here is more detailed information how it works in Todoist:
“https://support.todoist.com/hc/en-us/articles/205325931-Due-Dates-Times”

I agree. We’ll start with time, energy and the due date.

Inline commands would be great. However Facilething’s implementation is in my opinion not the best as it requires several keystrokes. In my opinion Toodledo’s implementation works better as there is only one modified ("/"). Having entered that the system automatically interprets the following text as start, due, length, tag, etc. It works very well.

Inline commands would be great. However Facilething’s implementation is in my opinion not the best as it requires several keystrokes. In my opinion Toodledo’s implementation works better as there is only one modified ("/"). Having entered that the system automatically interprets the following text as start, due, length, tag, etc. It works very well.

Thank you for pointing this out. I have tried their implementation. I have found that it’s not that different. This approach works with values that can be interpreted unambiguously. Which is useful, but not always possible.
For example if I enter /10 jan does it mean a due date or a start date? It can work however for things like energy, where :high can only mean one thing.

We will start with explicit commands like the ones suggested by @raullg, and it will be easy to add shortcuts where makes sense. For example :e high is equivalent to :high.

I also don’t appreciate the use of / for things like this, as it’s more likely to interfere with the title content.

By the way, a preview of this feature is coming out in this week’s release. Some examples:

set due date (relative to now)

To be expanded of course. Next is setting absolute start/due dates.

I see your point but as you noted with Toodledo when you enter the modifier (which could be “:”) then a menu pops up underneath where you can select what you want. This works very well. 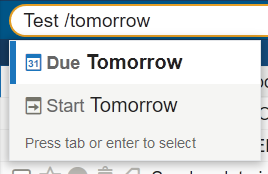 Hmm I’m pretty sure it only suggested one option to me when I tried it… I wonder how it looks once entered.

If the user is required to make a choice on the UI, then it kind of removes the benefit of fewer keystrokes.

You might want to add this to the help page in the app as I didn’t know it existed!

I think it’s a good idea to link to the user manual from the help dialog. Thanks!