GTD was developed before the age of smartphones and GTA software was not in David Allen’s mind when he developed the system which means that there are plenty of ways that software can improve GTD and make the system even more efficient.

Before smartphone, I carried around a notepad for years and one of the things that I realize that a smartphone can do that a notebook couldn’t is automate various things.

One of the things that is already automatic if you do GTD with a smartphone is our someday maybe list.

If it has a due time, it is not a Someday item. If it does not have a due date then it IS a Someday Maybe item or already correctly filed in your inbox.

If you are taking time to carefully consider a detailed someday maybe list , I say that you are waisting a TON of time when all you need to do to get to someday items is filter for items without a due time.

AND there are MANY MANY MANY other ways that smartphones can save our time.

I strongly disagree, IMHO due dates should be used as little as possible and only if there is a real due date, that if passed makes the particular action undoable because you are late.

If you are too late at the bus-station the bus is gone,of course you can take the next one but then you will be too late. That’s how due dates should be treated.

DA and GTD are really clear on this topic.

On the other hand it’s up to you how exactly you use your someday maybe lists. Some people like to have only those next actions on their lists that they are committed to complete in the next week or so. That keeps you n/a list sharp and short (and focus gets shorter too)
But if you aren’t strong and disciplined on weekly reviews this approach my lead to mountains of someday maybe that may someday crash really hard on you…
I personally am weak with reviews to be honest. About 2-4 times a year I declare gtd system bankruptcy and start over fresh.

Don’t get me wrong when I refer to DA and GTD saying this and that, I do not mean sound formal captious, in fact GTD is very flexible and DA often enough empahzises that what ever works for you is fine.
Here a few links to the topic that might help you getting some other perspectives.

next action vs. someday maybe

I still struggle with the definition of "next action". There are so much of them on my list that it would take weeks to do them all (same observation is found in the GTD book). So, if I am not committed to do them REALLY as NEXT action, the major...

Don’t forget we are all on a journey.

I somehow knew this would be a good discussion starter.
As always thanks for your input

If it has a due time, it is not a Someday item.

For me, this is true often, but not always. In any case it’s rare enough to not make a difference in a workflow…

If it does not have a due date then it IS a Someday Maybe item or already correctly filed in your inbox.

No. There are many actions I need to do as soon as possible, but not necessarily before a particular date, unless I come up with a fake deadline (which I don’t usually do). These are Next actions.

There are many actions I need to do as soon as possible, but not necessarily before a particular

And what I’m saying is, psychologically we know that is technically just a someday maybe thing. It’s a lot of stuff like that that we end up continually putting off and changing the due date before because its due date is fake.

I know what you’re saying though. I understand the feeling of having a task that has no real due date but "needs " to get done .

We may not want to hear it but unless we make those things actually due , they are actually just someday maybe items.

I think self employed people have the hardest struggle with this. If it’s a project for a client then the due date is real and easy but when you set dates that are grounded in your own will power, THAT is where things get sticky.

We still need to draw a line between something you absolutely have to do before a certain date (a hard deadline, if missed you are breaking the law or looking for a new job) and everything else. This is what Due Dates are for in the current design.

I should probably try and make better use of “start” dates then. 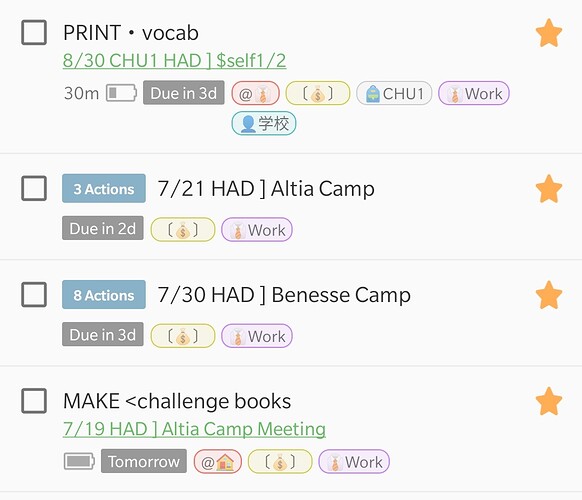 I didn’t know what start dates were for at the time. It will take me a few hours to update all my tasks.

Personally, I still think that a someday maybe list is really basically created automatically by simply listing tasks and Projects that have no due or start date.

Argg. Yeah. Still frustrating. When I select due tomorrow that needs to include tasks that start tomorrow, otherwise there is completely zero need for start dates.

I thought that I figured it out , but I guess not.

If something is due next week I need to see it in my Focus list one week ahead of time to start working on it.

Is this a bug?

Is this a bug?

Hm, works for me. As soon as the start date arrives the task shows up in the focus list.

Any item with a start date will be moved to Next and Focus when that day comes (at 00:00).