I use a Raspberry Pi 3 with Nextcloud as a central server in my home to sync my calendar, contacts, photos, documents, etc. among all my devices so I don’t have to use a third party service such as Google.

It would be a nice feature if I was able to run Everdo on my Pi as well.

The only thing I can’t sync without my desktop being turned on are my Everdo tasks. I know I could just leave my desktop on with Everdo running but I like to shut it down when it’s not in use because with storms here we get a lot of power fluctuations. Even with surge protectors I’d rather not chance the damage to my computer. I don’t worry about the Pi because it’s fairly cheap to replace if there should be a power surge.

I’ll +1 this. I’m considering getting a Pinebook for using when I’m on the move, as it’s light and cheap - but it’s an ARM processor, so it wouldn’t run Everdo at the moment. THat’s an issue if I want to take my todo list with me.

Is it just an issue of having a suitable build environment, or are there technical blockers to an ARM build?

Let me try making an experimental ARM build for the next update and see how it goes. I’ll send you a link to test.

Thank you for at least seeing if this is possible. It’s not difficult to make sure all my devices are synced now, I’ve made myself a task that reminds me to open the app on all my devices while my desktop is on, but it would be nice to be able to just open the app anywhere and know it’s always up to date without having to use a third party service.

I have a small home server running a number of things on an old Netbook with Intel Atom. I would have changed to Raspberry Pi, but I don’t want to lose Everdo. It would be fantastic to have an ARM build.

Here’s an ARM package for testing purposes for anyone interested https://release.everdo.net/1.2.19/everdo_1.2.19_armv7l.deb

I just downloaded it to try. I’m able to open it but only get a blank window. I’m getting ready to go out of state for a couple of weeks and unfortunately don’t have the time to dig deeper into what might be causing the problem.

Thanks for trying. Even if it ultimately doesn’t work.

The first thing is to run the app from terminal and check the output.

Tried that and there didn’t appear to be any errors.

This was all that was in the terminal. So it looks like it should be working, but as you can see the window is blank.

That’s good. Next step is to check whether ~/.config/everdo directory was created and then maybe the error got logged in error.log.

There’s no error log. Here are the contents of the ~/.config/everdo directory. 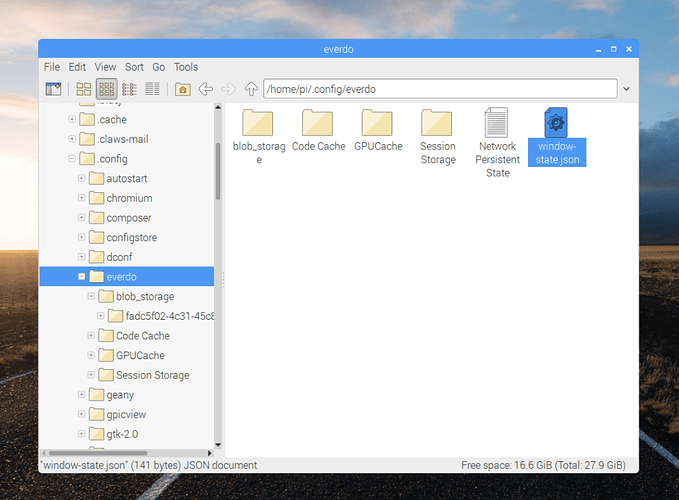 I see. I will try to figure out a way to debug this further.

Thanks. I’ll provide as much info as I can but I’ll be out of state between the Dec 22 and Jan 8 and will have limited access to my Pi.

@Andrei Could you create the arm64 deb package for testing on Raspberry Pi 4?
I want to run everdo on raspi too.

I will let you know when it’s done.

Is there any chance of a headless arm version that runs without UI? I am interested in doing an integration for Mycroft and Home Assistant. Most of these devices run on arm, but have no UI.

The ARM build is not working at all so far.

I will +1 this!
Being able to have an always-on pi to sync against would make my life easier