The app has been published on the App Store

Getting started with testing

wow, thanks so much, can’t wait to try it out

Looks good so far! The Title of a new item should have auto capitalization though, at least for the first word.

I have one question. Is it prepared only for iPhone or for iPad also?

currently the ios app is a little simple. as described, only inbox is availble. and requires ess sync.
looking forward to other lists like someday/maybe, next and etc.

Correct. A lot of work went into sync integration and other back-end code. Now more UI functionality is being added, as you can see described in my initial post.

Is it prepared only for iPhone or for iPad also?

What do you mean prepared? I have never used a todo app on iPad, so I’m not sure what adjustments are necessary. I know it run on an iPad

Sometimes when an app isn’t prepared for larger screens then it’s very hard to use it.
Common example: most ToDo’s apps on iPhone has a hidden navigation panel, because of screen size. The whole screen is dedicated to the list of tasks and you have to use gestures to bring back a navigation panel.
iPad gives you more screen spaces so the app should look like on the full laptop screen.

Maby it’s not a problem. I am just curious because iPan is my primary work tool at home.

I think you mean the split view-like navigation. Definitely one of the most important features. It is being added.

A new build has been pushed today to TestFlight. A few words about this update.

The navigation section has been added for switching between lists and project like you do in the desktop app. 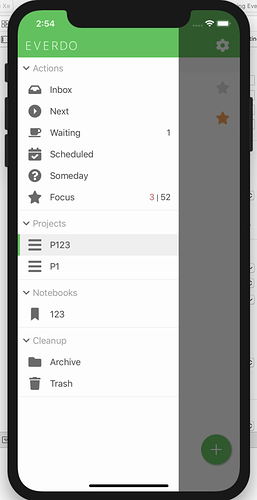 The navigation menu should open as usual by swiping the left edge of the screen or tapping the menu button at the top of the navigation bar.

Every list you navigate to should display all the relevant items.
Note that the item layout itself is incomplete and doesn’t include some important sections such as tags, time/energy icons and so on. That is not a bug yet. The data is there, it’s just not shown to you.

The navigation menu itself is also missing some functionality, such as tag-based navigation and docking / split view on tablets. That will be added soon.

The next priority is making the Item layout to display complete data with tags, clickable links, dates, project references and so on as opposed to the simplified layout we have now.

looks good now.
still it only has ESS sync at present.
will you add local LAN sync in future?

will you add local LAN sync in future?

Yes, it will be added sometime soon.

New build of the app to bring it a bit closer to completeness.

An update notification will be sent today. The invites for new members are being sent out today as well.

I have found strange behavior with tags.
Sometimes a tag doesn’t appear in iOS app despite it is visible in a desktop app. I found that if there is set a due date then the tag is visible.

Please notice that “Jan Kowalski” tag isn’t visible in iOS app.
I have checked this only for “waiting for” tasks.

I ma not sure if it’s a mistake or functionality in the queue. When use a navigation panel to switch between lists the panel doesn’t hide.

Sometimes a tag doesn’t appear in iOS app despite it is visible in a desktop app.

I ma not sure if it’s a mistake or functionality in the queue. When use a navigation panel to switch between lists the panel doesn’t hide.

Thanks for reporting, I will take a look.

The primary design objective of this editor screen is to reduce the number of taps required for processing of inbox items.

Consequently, it’s now possible to change the list with only one tap without leaving the editor. Setting a start date will automatically change the list to “Scheduled” and assigning a Inbox item to a parent will also make it a “Next” item by default.

Editing tags is possible without leaving the screen with a simple tap to add/remove a tag. Tags are sorted by frequency of use to simplify access.

After updating all my tasks which have late due dates are unstarred. They disappeared from the focus list. The only task which has a due date for today is still there.