Hi,
I’ve been using Everdo for a couple months now and feel like I’ve got a pretty good understanding of how it works now. New to the forums; I came to ask for some features

I like the general behavior of filtering with tags in Everdo. But when I start to gather a lot of tags, things get messy pretty quickly. One thing that would help me, personally, is to allow for customized tag “types”. Similar to how Contexts, People and Areas are all custom tag types, but then also add in a collapsible tree view to help eliminate some of the visual clutter and to help figure out where the tag I’m looking for actually is.

I find that I have a handful of different things that I want to classify or filter using tags.
My contexts include:

Ideally what I’d like to see in the left hand pane is something along the lines of the following, with each section being collapsible:

And then a similar collapsible list structure in the top of view filtering.

Ideally, I think I’d like to decide if each tag type could be used to filter the whole application (as Areas are now). That’s obviously an additional layer though. i.e. I use Areas for my work programs now, but I’d like to be able have a “Programs” tag type that could function similarly.

So, I think the problems I’m trying to solve are:

Hopefully this all makes some sense. I find tags to be a cornerstone of the way Everdo/GTD works, so having them be as flexible and personal as possible really helps to fine tune the system.

To be straight with you, hierarchical tags are not in the plans. My current belief is that they are an over-complication.

For the types of things that you have described I think you might be able to successfully use existing features like projects, checklists and the Next/ Focus lists. You could also experiment with namespacing your tag names so that they sort closer together.

Visual tag clutter, which starts to happen at around the 10 tag mark currently.

Not sure I understand this. I use only about 20 tags personally, so I admit it’s more difficult for me to relate users who use many more tags. But I wouldn’t consider 20 tags to be cluttering the UI too much. Grouping them into a tree certainly doesn’t obviously reduce clutter.

Understanding exactly what a tag is for and/or only seeing a tag if I’m interested in it at the current moment.

Do you utilize area-based filtering to the fullest? When you do, the number of tags that you see at once should drop drastically. Please see How to Define and Use Everdo Areas Effectively- Everdo if you have not.

Sculpting the overall view of the system to suit my own needs and ways of thinking better.

Would you please specify 2-3 of the biggest issues or sources of friction you have with the current system?

Hi Andre,
I’m finally circling back around to respond here. I wanted to take a bit of time to try out and consider some of what you mentioned. I’d still consider myself new to Everdo, though I’ve tinkered with GTD for several years.

To be straight with you, hierarchical tags are not in the plans. My current belief is that they are an over-complication.

This is maybe a disconnect in the way we are talking about things. From my perspective, Everdo already has some level of hierarchical tags. Though maybe that is the wrong vocabulary to use. I think maybe what I’m really after here is “custom tag categories/types”. That probably fits into the Everdo vocabulary better. That said, I would consider “Areas”, “Contexts” and “Contacts” to all be tag types; Contexts & Contacts are straight from GTD, but as discussed in the blog post you linked to Areas are already distinct from any GTD vocabulary (which I think is a good thing; GTD was made pre-digital tools and “adhering” to it 100% doesn’t make sense to me in the context of digital tools).
For me, and I would I guess most/many people, there are other categories that would be helpful to use for tracking and reviewing tasks & projects. A few examples for me would be “Activity” and “Builds”. Activity is honestly a variant of a GTD Context, but it’s much more a state of mind than physical location or resources for me. So it would be helpful to separate these in the UI. In my imaginary scenario, Activity would appear in the sidebar just like CONTEXTS does. I can currently do things like prepend different letters to a context to clarify what type it is. This works, but things get messy.

As an aside, I’d love to see a separate left pane heading for Contacts as well. I may use these beyond their intended use (in order to have fewer tags). I use them for Waiting items, to tag actions that result in a deliverable to the contact and for GTD Agenda type actions/notes.

This is from my work setup, which is significantly less cluttered and complicated than my personal setup: 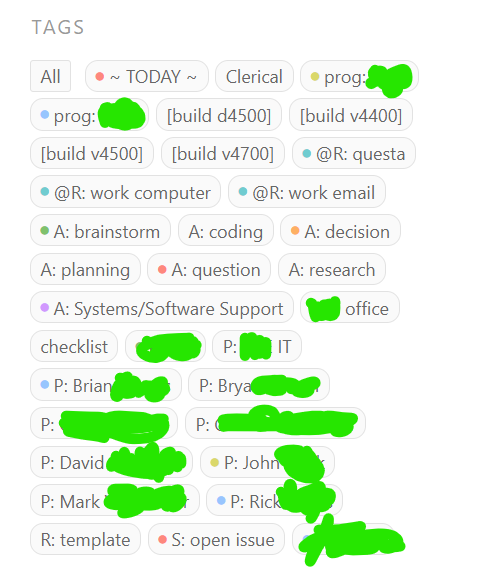 Do you utilize area-based filtering to the fullest?

I do think that part of my problem may be that I’m not making great use of the “Areas” feature. I’ve tried to fine tune it, but I’ve struggled to really come up with something that makes sense to me and that I use. I fall into the “usually just leave All Areas selected” camp, much of the time. Trying to figure this out is one of the reasons it’s taken me a while to respond to your post; I definitely still have work to do here though.

Grouping them into a tree certainly doesn’t obviously reduce clutter.

For me collapsible trees always make me feel calmer. I’m not sure if that’s a common feeling or not. Hiding what I don’t want to see right now, knowing that I can see it again with one click gives me a fuzzy calm feeling inside. I’m willing to admit that could just be me though

Would you please specify 2-3 of the biggest issues or sources of friction you have with the current system?

This one is the other reason I took a while to get back to you. I can definitely see how I presented a solution, without a quantifiable problem. After some consideration, I think I’ve clarified to myself a bit what I’m struggling with.

Hopefully I’ve managed to clarify at least some of what I’m struggling with and why I think extra tag categories would help me with at least some of it. I’ve written a bunch of words and just in case they wound up coming off as negative, I do want to say that I’m really impressed with Everdo on the whole; it seems genuinely focused on making a useful tool rather than adding flashy, attention grabbing features.

From my perspective, Everdo already has some level of hierarchical tags. Though maybe that is the wrong vocabulary to use. I think maybe what I’m really after here is “custom tag categories/types”. That probably fits into the Everdo vocabulary better. That said, I would consider “Areas”, “Contexts” and “Contacts” to all be tag types

I totally second this. As a workaround, I start my location labels with “L:”, contact labels with “C:”, priority labels with “P:” and resource labels with “R:”. However, seeing that Everdo basically already has this function for tags, areas, and contact, I can’t imagine it too hard to add some more categories or even make them customizable.

Grouping and collapsing by those categories would be really nice also.

Would this be an alternative to sub-projects, which if I understand correctly, are not going to be implemented in order to observe GTD principles?

It certainly could be used as a way to group projects. I already do this sometimes when I have a lot of related projects. The difference with tag categories is that someone could create a “master project” tag category to group any tags used in this way.

As it is now, the only way to group such tags would be to prepend all of the “master project” tags with MP or something similar.